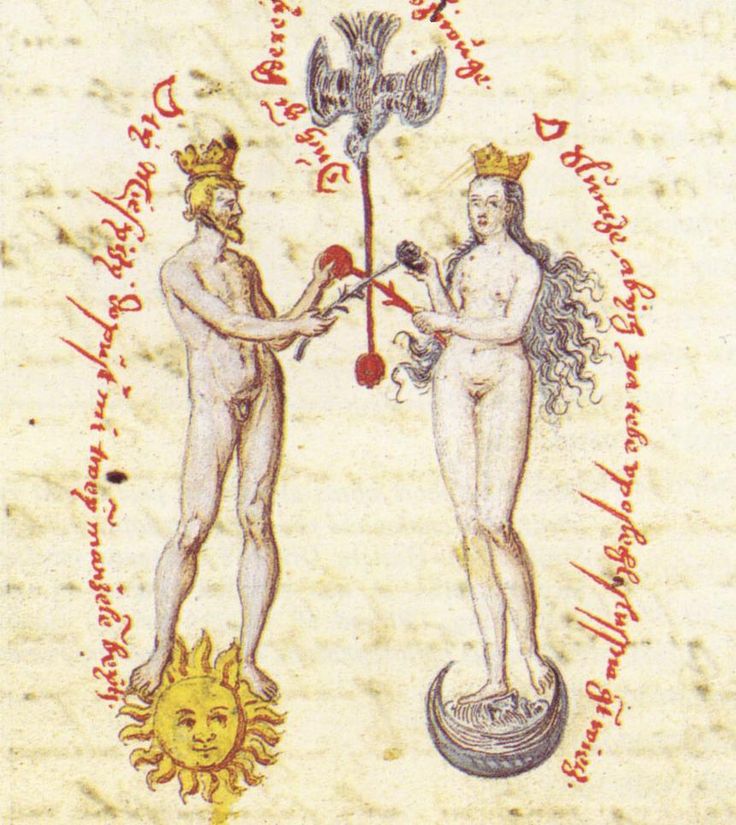 Do you ever wonder if there are two kinds of people in the world? Those who carry forth with raw emotion and pure intuition, creating art for the sake of it, and those who observe, measure, and intellectualize art into an academic study?

I wonder if this same dynamic is happening with Tarot. There are those who understand the deep esoteric symbolism, history and parallels to modern psychology and psychoanalysis, and those who seek Tarot out of pure curiosity into the magic and mystery of the cards in themselves.

While Tarot has only entered my life within the last 5 years or so, I came to the strange conclusion that I had always known the book of Tarot. I have done visual art since as long as I can remember. But when I came to embrace Tarot, I eventually learned it was always within me and my art.

What’s in a name?

We see the rational and structured vs. the irrational and creative in the names given to the practitioners of Tarot.

What do you think of when you hear “Tarot Reader”? Well, what comes to my mind is someone who uses reason to interpret the cards. They use ancient images and their allegories to weave a story based on complex systems like astrology and Kabbalah, systems that overwhelm and deter the average Tarot enthusiast.

And what about the “Tarotist”? Here again, I go to the feminine principle, the creator, the intuitive, or artist.

The story is weaved not so much through a system of symbols which logically connect and reinforce one another, but comes from a much deeper place, beyond language. This is the place of intuition.

So are these just two different styles of reading Tarot?

When you look at what Tarot is, especially after the Rider-Waite deck established imagery for the Minor Arcana, it is art.

As is well-known, Carl Jung saw the imagery of the Tarot as a shared, collective understanding of human experience. His archetypes are universal human concepts of personalities, with their trials and triumphs.

It is these archetypes that are used as a common justification for the use of cards in personal development by modern readers. As Tarot veteran Mary K. Greer points out, while Jung may not have known extensively about the cards, he did indeed see them as a powerful entry point to the archetypes.

So does any amount of rationalizing the cards change the effect the imagery has on the human psyche?

Well, for one thing, not all Tarot cards have used imagery. Earlier decks have used only the number and symbol of the suit for the Minor Arcana. These are known as the “pip” cards, pictured below from the Marseilles deck. And it is still not that uncommon to see Tarot being read with regular playing cards. 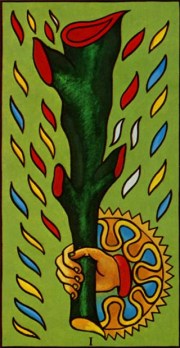 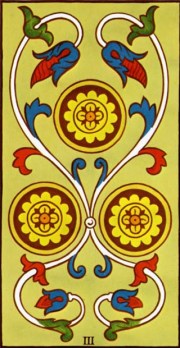 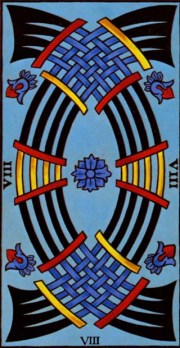 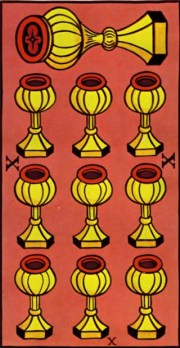 Cosmic Whispers Tarot discusses how the stripped down, pips-only cards follow the reason and pattern recognition of the Emperor, offering a more objective interpretation, rather than relying on the subjective interpretations given by the artists of various decks. So, the more varied artistic renditions of the Tarot, the better? Or is a standardized format, without the interference of artistic liberty, the way to go?

Art as a spiritual practice

For many, art lives in the sphere of the individual and subjective. Moreover, art has long been held as a spiritual practice, as a means to express our unconscious, spiritual side. There are even those who hold that symbolic imagery like the Tarot can be too rational, that these timeless images can block true forms of creativity. The structure is limited to what the conscious mind can produce and keeps the unconscious mind from truly shining through.

Mats Winther discusses the issue of creativity at length in his fantastic article Creativity – the unconscious creative spirit. He likens the creative process to the alchemical path of enlightenment (coniunctio Solis et Lunae or the blending of opposites) . According to the alchemists, the conscious mind must be conquered before we can really gain any spiritual benefit from expressing the unconscious through abstract, non-nonsensical art.

This provokes some interesting questions. Is Tarot too rationalized and structured through symbolism? Or should it be more lax with the artwork, speaking to the unconscious mind? Doesn’t that just make it something altogether, like an Oracle card?

How can we blend these opposite approaches like the alchemists to produce our very own Philosopher’s Stone?

A doorway for every mind

Personally, I rely heavily on the healing imagery of the Tarot in my readings, much in the same way as when I sit down and work on a piece of art. I see the structure of symbolism and the archetypes as the materials for a building. While the materials are in their nature constricting, an almost infinite number of shapes and designs can be created. So too, can the images from our everyday experiences and mythology be used as the building blocks for our own creativity. I believe that the limits of Tarot art can still exercise our intuition.

Here is a great interview with Kelly-Ann Maddox and Eric Silvermoon about how the use of art opens us up to our intuition and imagination. Using an illustrated deck is not only visually appealing, but opens a doorway to imagination, where you can walk into a card and explore your own senses. What speaks to one person, may not speak to another. The doorway of a certain deck may be opened by the artist, but not everyone may enter.

But who should make the deck?

Everyone has a different approach to Tarot, and thus, to creating a deck.

When it comes to actually creating Tarot art, part of myself comes from the hidden place of the image, and lets that unknown part of me that I can’t begin to understand take over. If I let the meaning of a card settle long enough on my tongue, it comes out through my fingers, and I hardly know how it got there.

However, I can’t escape the tapestry of the Tarot. Even if the wordy, logic-minded part of me didn’t crave a complicated, symbolic system to my cartomancy, the book of Tarot is the book of me and persists through my most intuitive, feeling moments of artistic creation.

So perhaps when it comes to Tarot art, I really am seeking some sort of alchemical union of opposites where I conquer the conscious world of symbol and structure, simultaneously delving into my unconscious spirit through art.